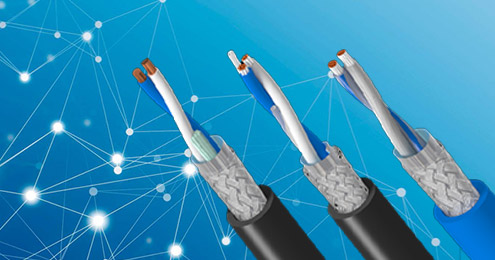 SINGLE PAIR ETHERNET FOR IIOT: CONNECT SENSORS TO THE CLOUD RELIABLY, WITH A SMALL FOOTPRINT

Ethernet migrated to the factory floor as a key way to connect automation systems and transmit field data to the network. Now with the “Industrial Internet of Things” (IIoT) taking centerstage, real-time data from connected sensors and actuators can be shared and analyzed, allowing advances like artificial intelligence, machine learning, and digital twin technology to prevent downtime via predictive maintenance and optimize productivity via automated forecasting.

Critical for communication in industrial control and automotive applications, traditional Fieldbus protocols provide time-sensitive transfer to ensure that information is sent and received as needed. However, the development of Time-Sensitive Networking (TSN) by the Institute of Electrical and Electronics Engineers (IEEE) addresses these needs via time synchronization and deterministic communication over standard Ethernet.

The growing number of field sensors and actuators as well as the demand for more information can create bottlenecks in traditional Fieldbus protocols in automation. As more links are added to systems, the bulk of Fieldbus cables also makes space a limiting factor in oft-crowded conduit. SPE with TSN makes standard, end-to-end Ethernet networking and completely digitized communication possible in the industrial environment. Single pair Ethernet enables many sensors, actuators and I/O modules to feed data to programmable logic controllers (PLCs), manufacturing systems, the enterprise backbone, and ultimately the cloud in real-time.

With one Ethernet network from sensor to cloud, SPE and TSN enables efficient deployment of IIoT in manufacturing. Single pair Ethernet and TSN can also reduce capital expenditure by 80%, while delivering long-term savings:

The industrial automation industry took note of these SPE advances, leading to formation of an IEEE group with a goal of developing short-reach 10BASE-T1S supporting 10 Mbps to at least 15 meters and long-reach 10BASE-T1L to at least 1000 meters. These standards have created an attractive alternative to traditional Fieldbus and are ideal for connecting IIoT and IoT devices. Market demand, combined with these standards, will likely lead to industrial Ethernet outpacing traditional Fieldbus communications in industrial environments in the not-so-distant future.

This resource compliments of Belden

Key stakeholders across the entire value chain — from the developers of the sensors and actuators to the innovators of automation and robotics and those looking to build the next smart factory — need an industry-leading partner with the engineering, product and application expertise to develop a complete end-to-end SPE solution. That partner is Belden.

When it comes to signal transmissions, Belden is the number one solutions provider. In conjunction with developing the most advanced cable on the market, we are investing in developing the complementary SPE infrastructure.

Whether you’re involved in developing the technologies that will collect, analyze and process real-time field data, or designing the smart robotics, machines and automation equipment that will respond to that data and optimize production, Belden wants to know your specific challenges and goal to help push you ahead of the competition. Together, we can form a partner ecosystem to drive IIoT with SPE — from the sensor to the cloud.